I’m not smart very often. But when I am, I’m usu­al­ly too smart for my own good.

"Wrong," she said. It's time for you to go downstairs and tie yourself up — and make sure you use a blindfold."

Lily knows this is one of my favorite ways to start a scene: Tied up and waiting for her. I fantasized about such scenarios for years and years before I finally ventured out into the lifestyle. Sometimes she ties me up; other times she orders me to do it myself.

So off I scampered.1

The basement isn't really a dungeon per se, but it features a steel I-beam that makes a perfect hard point. I pulled out our toy bag, rummaged around and assembled some goodies, then set about my task.

I hung a chain from the I-beam, wrapped a thick belt around my chest just under my arms, then fastened the chain to the belt in back. Standing, I had just enough slack to move around a bit, but not much. I'd already fastened leather cuffs on my ankles and hooked them about 6 inches apart with a couple of leash clips.

These were all things we'd done before, but previously I had simply handcuffed my hands behind my back. I was well and truly helpless, but Lily was mildly frustrated2 that my hands kept getting in the way when she was spanking and flogging me.

So this time I put on my heavy play collar and the aforeordered blindfold, slipped my arms through another belt behind me, then cuffed my hands in front and padlocked them to a ring in the collar. I wriggled about a bit before Lily showed up, testing my bonds: With the belt pulling my elbows together behind me, I couldn't reach the blindfold or the buckle on the collar. The other belt was sturdy enough to hold me upright safely; my ass was fully exposed with no interfering hands, and Mr. Stupidhead and The Sidekicks were similarly defenseless up front. 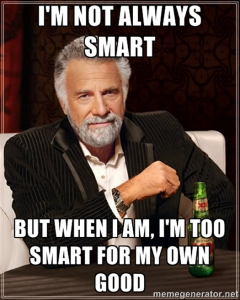 I might not be able to sit down tomorrow, I thought smugly, but at least this time I'll be able to type. For once I'd been smart enough to think ahead a little.

A million years or so later, I heard Lily open the basement door, and the fun began.

Lily did the usual kick-the-tires routine she does when we start like this: She walked around me a couple of times, purring deep in her throat, then grabbed my hair and pulled my head back: "Who do you belong to?" she whispered.

"I belong to you, Beautiful Mistress."

She warmed me up with her riding crop, then switched to a leather flogger for a bit.

And then — silence. I squirmed uneasily, knowing she was preparing to do something else and knowing she would probably try to surprise me with it. Maybe this time she —

I jumped as the electric flyswatter touched my left buttock, more from surprise than pain — although it did hurt a lot.

Shit! I thought. The only thing worse than not seeing that coming would be seeing it coming! I jumped again as the zapped me on the other side, catching a quick smoky whiff as the bug zapper fried a hair or two off my ass.

Silence again. I listened, struggling in the belts and handcuffs again and unconsciously tilting my head around like Stevie Wonder. Maybe she was going to pick another —

I yelped as the bug zapper contacted the tip of my penis. Lily had zapped me there before and I knew it wouldn't really injure me, although it hurt like crazy. The last time Lily punished Mr. Stupidhead with the bug zapper, though, I was tied spreadeagled on the bed. This time I was standing up.

I flinched violently, trying involuntarily to hunch over and cover Mr. Stupidhead with my hands. Instead, all I managed to do was yank hard against the handcuffs, sending bolts of pain from my wrists up to my elbows. The attempt to hunch forward snapped the chain taut; I lurched back as the belt hoicked up around my chest, tightening brutally like the shoulder belt in a car. I stumbled back to regain my balance, but my step was snubbed short by the cuffs linking my ankles.

A bare second after the bug zapper sparked up against Mr. Stupidhead, I found myself disoriented, flailing for balance and plunging into a blind panic. The belt and overhead chain kept me from falling or stumbling into anything while blindfolded, but I felt as if I was being slammed around in a cement mixer.

Before I managed to blurt anything as coherent as my safeword, Lily grabbed my arms and steadied me. She quickly removed the blindfold and handcuffs, then ordered me to hold the chain while she unfastened the belt around my chest. I sat down, fighting back a sudden rush of nausea as the jolt of adrenaline passed.

Being a good domme is, in my humble opinion, kind of like being an airline pilot: You might go years, even your whole career, and never deal with any emergencies. But if something does start to go south on you, being alert and prepared can make the difference between a minor mishap and a disaster. Take the guy who managed the water landing in the Hudson a few years back — he earned his entire career's salary in just a few minutes and sent his passengers home with wet feet, but alive.

Mr. Stupidhead is fine — but I'm sporting lovely bruises on my wrists, inside my elbows and in my armpits. No biggie — people get hurt worse playing basketball every day.

For me, though, trusting Lily for my physical well-being takes a back seat — we all have to trust people we don't even know with our lives almost every day. Lily, on the other hand, is the only one I've given my heart to.

And no matter what happens or how often we play, I'll always have the same answer for her:

I belong to you. And I trust you.